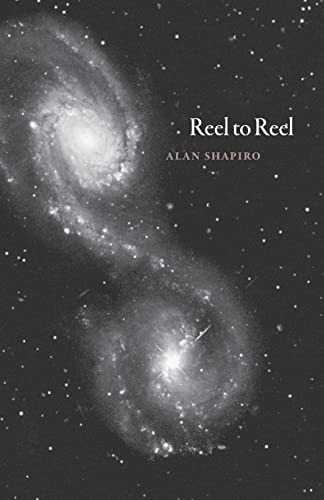 Alan Shapiro was the second Phoenix Poet (after David Ferry) in Fall 1983, so it is with great anticipation that we welcome him back to the fold after twelve years with his newest book “Reel to Reel,” just in time for the 30th anniversary of the series.The volume bears all the hallmarks of the beautifully composed poetry that we ve come to expect from Shapiro: the poems move from the intimacies of domestic love and attachment, and proceed outward to include contemporary social and political realities, including the wars in Afghanistan and Iraq via Homer s “Iliad.” But Shapiro has also evolved as a writer, taking a quantum leap of faith, as it were, to explore new modes of expression and alternate ways to propel his verse syntactically. Like his earlier books of poetry (most of them published by this Press), Shapiro s abiding subjects remain: ” Reel to Reel” is very much a book about fundamental human truths, but it also yearns for truth in a larger universe we barely comprehend, from the natural world s infinitely small realities to the infinitely large expanse of the cosmos. This is, far and away, his most ambitious book.”

Alan Shapiro has published many books, including Reel to Reel, which was a finalist for the Pulitzer Prize. A member of the American Academy of Arts and Sciences, he is the William R. Kenan Jr. Distinguished Professor of English and comparative literature at the University of North Carolina at Chapel Hill.

Reel to Reel, Alan Shapiro’s twelfth collection of poetry, moves outward from the intimate spaces of family and romantic life to embrace not only the human realm of politics and culture but also the natural world, and even the outer spaces of the cosmos itself. In language richly nuanced yet accessible, these poems inhabit and explore fundamental questions of existence, such as time, mortality, consciousness, and matter. How did we get here? Why is there something rather than nothing? How do we live fully and lovingly as conscious creatures in an unconscious universe with no ultimate purpose or destination beyond returning to the abyss that spawned us? Shapiro brings his humor, imaginative intensity, characteristic syntactical energy, and generous heart to bear on these ultimate mysteries. In ways few poets have done, he writes from a premodern, primal sense of wonder about our postmodern world.